A translator calls him “a peddler of paradoxes” and “an alchemist who casually synthesized sacred and profane.” The work of Rabbi Shimon Gershon Rosenberg (Shagar) (1949–2007), widely known in Israel, is new to an English-reading audience. The English translation of his book of essays, Rabbi Shagar: Faith Shattered and Restored, Judaism in a Postmodern Age (Maggid Modern Classics, 2017), was supported by Targum Shlishi, and includes a preface by Aryeh Rubin, the foundation’s director. Go here to read a press release about Targum Shlishi’s support and Aryeh Rubin’s preface.

The book is the first to gather and translate a thematic collection of Shagar’s philosophical works into English, with the essays selected to resonate with Jews in the Diaspora. Since its publication in 2017, the book, and Shagar, have gained a fair amount of media attention. The following is a selected list of articles and excerpts about Shagar and particularly about these collected essays.

Book Discount: The publisher has generously offered our readers a 25 percent discount on the book. Simply go to this link and enter the promotion code: MAGGID25.

“Torn between the truths of Torah and contemporary culture, many in Modern Orthodoxy feel the tension can only be resolved by choosing one or the other. In Rav Shagar they will find a teacher who understands this dilemma on a deeply personal and existential level, yet remains committed to authentically living in both worlds. His teachings represent a powerful model of engaging the broader intellectual currents within which one lives while maintaining an unyielding commitment to Torah.”
Read the full article

“Faith Shattered and Restored: Judaism in the Postmodern Age by Rabbi Shagar a Book Review,” The Times of Israel, by Naftali Brawer, June 13, 2017

“For Rav Shagar the question is not which truth to accept, but rather what is truth altogether? Can one be certain of anything? In its hard manifestation, postmodernism leads to nihilism, and this is what Rav Shagar sees as a real challenge to a person of faith. Instead of denying postmodern angst, he leverages it to offer a deeper, more sophisticated faith. One that does not seek certainties but chooses to surrender to the unknowable.”
Read the full article

This article is an edited transcript of a conversation about Rabbi Shagar between Elie Leshem, the translator of Faith Shattered and Restored, and Dr. Zohar Maor, its editor. In his introduction to the conversation, Leshem writes of Shagar: “Not only did he subject the Talmud to literary analysis, diverging from study methods honed over centuries, but with a brazen concoction of Kabbalah and psychoanalysis, Hasidism and postmodern theory, he set about forging a new Orthodox personality, one that could remain firmly rooted in tradition, even when buffeted by the gales of secularism and modernity.”
Read the full article

“Paradoxically or not, specifically when the Jewish community in Israel and in the Diaspora is more secure and well-off than it has been in a very long time, many feel and intellectual and spiritual dullness. Rav Shagar seemed to have been well aware of that. And he was willing to go very far to shake us out of it.”
Read full article 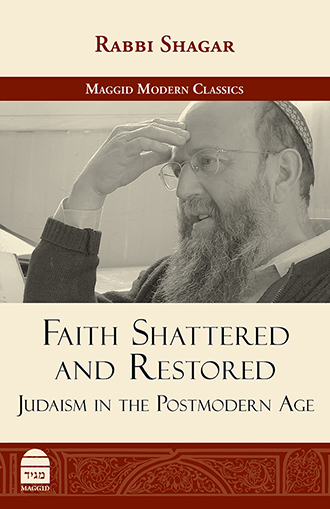 “God, Torah, Self: Accepting the Yoke of Heaven in the Writings of Rav Shagar,” Lehrhaus, by Levi Morrow, May 26, 2017

What does “accepting the yoke of Heaven” mean? Shagar contends that this act is one “around which the life of a Jew is organized.” In this introductory article, Levi Morrow argues that it is critical to understand the meaning of the phrase because it is so central to Jewish life, and he examines two different and possibly contradictory ways in which Shagar approaches these words in his writings.
Read the full article

“Perhaps Rav Shagar has it right: ‘[I]n light of the multiculturalism that characterizes the postmodern condition, I no longer feel the need to justify myself to the Other or, conversely, to recognize him in me—and this is true of both the Jewish Other and the non-Jewish one.”
Read the full article

“Hundreds of Youth at Seminar in Memory of Rabbi Shagar,” Arutz Sheva 7, by Rochel Sylvetsky, June 19, 2017

This article discusses Rabbi Shagar’s life and legacy, as evidenced by a well-attended conference held in June 2017 in Jerusalem. In describing him, the journalist writes: “Rabbi Shagar’s example was first and foremost strict adherence to halakha—he did not, as opposed to other new Torah study centers, try to adapt the Torah to suit the times, but, an original thinker, was able to reconcile postmodernity and its individualism with strict observance of Torah law, innovatively find room for the halakhic way of life as a choice in a postmodern world, for Torah as it had been handed down through the generations. Halakhically strict, and avid Talmudist, he was philosophically and personally existentialist and demanding of himself. At the same time, he saw Rabbi Avraham Kook, who stressed the holiness of the nation and the miracles of its return to the land, as his spiritual mentor.”
Read the full article

“Judaism and Post-Modernity—Rabbi Shagar in English Translation,“ The Book of Doctrines and Opinions (blog) by Alan Brill

This blog has several posts on Rabbi Shagar’s work. This post includes the English version of an essay by Shagar and the blog writer’s analysis of his work. Describing Shagar’s impact, Brill explains, “Rabbi Shagar, regardless of the philosophic label, allows a generation to accept the complexities of the modern world without looking for a resolution. His thought made space for questioning and the liberating acceptance of the possibility of alternatives. They are not going back to the ideological certainties of the past, but look to create new approaches.”
Read the full article

Images: detail and cover of Rabbi Shagar: Faith Shattered and Restored, Judaism in a Postmodern Age.