Before It’s Too Late: The Search for Mass Graves of Jews Massacred by Nazis in the Ukraine 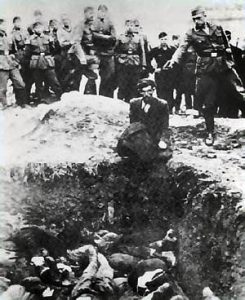 1.25 million Jews were killed by the Einsatzgruppen (Nazi mobile killing units) in the Soviet Union and disposed of in mass graves between June 1941 and spring 1943. The locations of the majority of graves are unknown. Documentation of the massacres is sparse. Father Patrick Desbois, a Catholic priest in Paris, has taken on the mission of locating and documenting all mass graves in the Ukraine and securing tangible proof of the genocide.

Aryeh Rubin of Targum Shlishi is spearheading an informational and fundraising effort to support Father Desbois.

67-minute podcast of a lecture by Father Patrick Desbois about his work delivered March 5, 2009 at The Shul of Bal Harbour, Miami, Florida, sponsored by Targum Shlishi.

9-minute film about the search for mass graves of Jewish victims of the Einsatzgruppen, produced by Yahad-In Unum, Father Desbois’s organization.

Film: Before It’s Too Late

10-minute film about Father Desbois’s work and the historical background, with current and historic images, produced by Targum Shlishi.

If a Holocaust Victim Could Speak

A note written to a friend, from Aryeh Rubin, director of Targum Shlishi.

Further information on the project (PDF).

A selection of articles about Father Desbois’s work and a summary statement prepared by his organization, Yahad In Unum.