“Souls of his magnitude do not come our way often. Sometimes, even now, one must brace oneself when faced with the full force of Rav Kook’s passion. The more one tries to grasp him, the more he recedes, or perhaps ascends. Yet large as Rav Kook’s life was, his work is even larger,” writes Yehudah Mirsky in the introduction to his book Rav Kook: Mystic in a Time of Revolution. Targum Shlishi helped support the author’s work on this book, which is part of the Jewish Lives series from Yale University Press.

The volume is intended to be an accessible and brief overview of the life and work of Rabbi Abraham Isaac Kook (1865–1935). While there is a large body of work on him in Hebrew, very little exists in English; this is the first English biography on Kook in more than fifty years.

Rabbi Kook immigrated to Palestine in 1904 to become Chief Rabbi of Jaffa, and eventually he became the first Chief Rabbi for Palestine. He wrote extensively, and the wide-ranging themes he explored included the relationship between Jewish identity and universal ethics; between the old and the new; and between secular nationalism and religion.

Mirsky, a professor of the Practice of Near Eastern and Judaic Studies at Brandeis University, notes that Kook is such a major figure in both contemporary Israeli politics and in Jewish spirituality that “neither can be properly understood without him.” He explains that while Kook is best known in the West as the founding chief rabbi of modern Israel and the spiritual godfather of Religious Zionism, those facts are not paramount in terms of understanding Kook. In fact, there has been much misunderstanding of Kook’s ideas, and part of the purpose of this book is to provide clarity.

Mirsky writes: “Rabbi, philosopher, Talmudist, communal leader, poet, mystic, and tzaddik, Rav Kook resists easy categorization. The endless play of light and shadow in his mind, at times fevered, at others serene, recasts the conventional ideas of his time in new and complicated patterns.”

The following is a brief excerpt from the book. 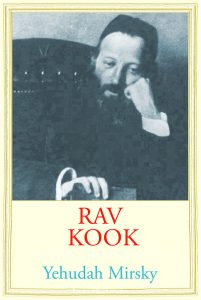 But if God is truly everywhere—to the point that He nearly obliterates the very concept of “where”—what room is left for anything that is not Him, for human personality or will? How to square the great, jagged diversity of life with the all-encompassing circle of a living, animating, infinite God?

Much of Western theology developed around this central problem of God’s immanence and transcendence, His dual presence on earth and in heaven. Rav Kook’s journals are one long attempt to wrestle with this conundrum—not only as a philosophical problem but also as a complex vision coursing through his times and his own soul “I am full of love for God. I know that that which I seek, that which I love, is not called by any name. How could one name that which is more than everything, more than the good, more than the essence, more than being? And I love, and I say, I love God.”

There is divine light in everything, and it is on the move: “The inner light shining in all of being, must build its world. It runs its course heedless of its connection to the surrounding light outside it, full of worlds…for inside it is fixed a heavenly longing, to join the incalculably greater surrounding light.” The divine light in all things strains upward, toward the source that is also its destination.