The history of the Holocaust in Lithuania was effectively rewritten for decades. In a “country [that] sports street names and monuments honoring locals who collaborated with the Nazis during World War Two,” as Josh Cohen wrote on the website Defending History, any inquiries into the nature of the widespread Lithuanian collaboration with Nazis was considered taboo. That status quo has been radically challenged and is changing, spurred in part by the 2016 publication of the controversial book Musiskiai (“Our People”), co-authored by Lithuanian writer Ruta Vanagaite and Nazi-hunter Efraim Zuroff, which investigates Lithuanian collaboration during the Holocaust. 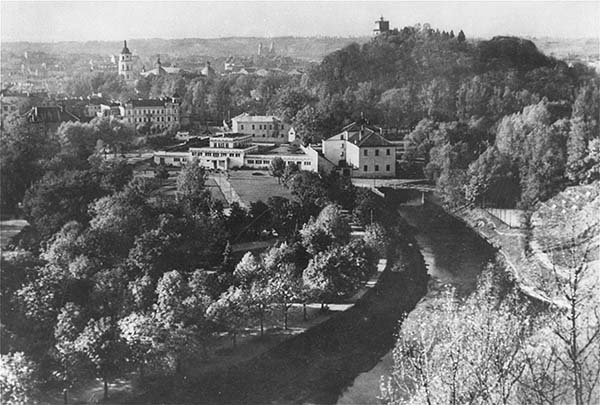 In conjunction with International Holocaust Remembrance Day on January 27, this blog post features a recent academic paper by scholar Dovid Katz on the topic of Holocaust Studies in Lithuania, along with links to selected other relevant articles.

International Holocaust Remembrance Day commemorates the January 27, 1945 liberation of Auschwitz-Birkenau. The United Nations General Assembly established this day with a dual purpose: to honor the memory of the Jewish victims of the Holocaust; and to promote Holocaust education worldwide and help prevent genocide.

Katz’s paper, “The Extraordinary Recent History of Holocaust Studies in Lithuania,” appears in the current issue (volume 31, issue 3, December 2017) of Haifa University’s journal Dapim: Studies on the Holocaust (view an uncorrected proof of the article here).  Katz is an independent scholar, author, researcher, and university professor. He is also editor of the website Defending History, which defends the history of the Holocaust from deniers. Targum Shlishi has supported Defending History with grants in 2014 and 2016 (go here to support Defending History).

The abstract and an excerpt from the article are reproduced below along with a link to the full article; links to additional related information are also included.

Abstract: “The Extraordinary Recent History of Holocaust Studies in Lithuania,” by Dovid Katz, from Dapim: Studies on the Holocaust

(go here to read full uncorrected proof of the article)

The paper argues that the recent history of Holocaust Studies in Lithuania is characterized by major provision (for research, teaching and publishing) coming from state-sponsored agencies, particularly a state commission on both Nazi and Soviet crimes. Problematically, the commission is itself simultaneously active in revising the narrative per se of the Holocaust, principally according to the ‘Double Genocide’ theories of the 2008 Prague Declaration that insists on ‘equalization’ of Nazi and Soviet crimes. Lithuanian agencies have played a disproportionate role in that declaration, in attempts at legislating some of its  components in the European Parliament and other EU bodies, and ‘export’ of the revisionist model to the West. Much international support for solid independent Lithuanian Holocaust researchers and NGOs was cut off as the state commission set out determinedly to dominate the field, which is perceived to  have  increasing  political  implications in East-West politics. But this history must not obscure an impressive list of local accomplishments. A tenaciously devoted group of Holocaust survivors themselves, trained as academics or professionals in other fields, educated  themselves  to  publish books, build a mini-museum (that has defied the revisionists) within the larger state-sponsored Jewish museum, and worked to educate both pupils and the wider public. Second, a continuing stream of non-Jewish Lithuanian scholars, educators, documentary film makers and others have at various points valiantly  defied state pressures and contributed significantly and selflessly. The wider picture is that Holocaust Studies has been built  most successfully by older  Holocaust  survivors  and  younger  non-Jews, in both groups often by those coming to work in it from other specialties out of a passion for justice and truth in history, while lavishly financed state  initiatives  have  been  anchored  in  the inertia of nationalist regional politics.

In Lithuania, the primary provider for Holocaust studies for close to two decades has been the state-sponsored International Commission for the Evaluation of the Crimes of the Nazi and Soviet Occupation Regimes in Lithuania (ICECNSORL), which was established in 1998 by decree of the nation’s president and is housed in the office of its prime minister, embedding it in the highest strata of Lithuanian politics. Several of its activities have enabled significant contributions in research, education, and public commemoration. It has, however, played a simultaneous and inseparable role in nation- alist-based historical revisionism designed for export, and current geopolitics, in a part of the world where these aspects of history are contemporary politics. The same com- mission providing for research is a primary engine for changing the actual narrative of the Holocaust per se into the revisionist ‘Double Genocide’ model, while straddling the political need to appeal to both the local nationalist base and Western and foreign Jewish audiences.1 The core of the history has perhaps been best summarized by Yitzhak Arad 2:

In order to obfuscate and rewrite these [historical] events and the very concept of the Holocaust, elements of the Lithuanian government have widened the definition, using its ‘international commission’ to bring under single consideration the events of the Second World War as well as the events in Soviet Lithuania until the death of Stalin in March 1953, and even for many years (and decades) after that, all in order to establish the theory of a Holocaust suffered by the Lithuanian people.3

The current Double Genocide myth, which posits supposed equality in principle of Nazi and Soviet crimes, has come to have its own foundational document, the 2008 Prague Declaration, which boasts the word ‘same’ ﬁve times, demanding inter alia that ‘conscious- ness of the crimes against humanity committed by the Communist regimes throughout the continent must inform all European minds to the same extent as the Nazi regime’s crimes did.’4

Additional Materials Related to the Holocaust in Lithuania

Defending History website’s section on the Holocaust in Lithuania

Footnotes to the above excerpt from “The Extraordinary Recent History of Holocaust Studies in Lithuania”
1T he political impetus to simultaneously ‘satisfy’ both a local nationalist base and Western and Jewish audiences was perhaps first described by N. N. Shneidman in his Jerusalem of Lithuania: The Rise and Fall of Jewish Vilnius (Oakville, Ontario: Mosaic Press, 1998), pp. 167–168.

3 Yitzhak Arad, “The Holocaust in Lithuania, and its Obfuscation, in Lithuanian Sources,” Defending History, 1 December 2012, section 15 (‘Conclusion’), www.defendinghistory.com/yitzhak-arad-on-the-holocaust-in-lithuania-and-its-obfuscation-in-lithuanian-sources/46252#conclusion. For an opposing view, see Saulius Sužiedėlis, “The International Commission for the Evaluation of the Crimes of the Nazi and Soviet Occupation Regimes in Lithuania: Successes, Challenges, Perspectives,” Journal of Baltic Studies 45:1 (2014), pp. 1–16.

4 Prague Declaration on European Conscience and Communism, 3 June 2008, Prague, Senate of the Parliament of the Czech Republic,  www.praguedeclaration.eu/.